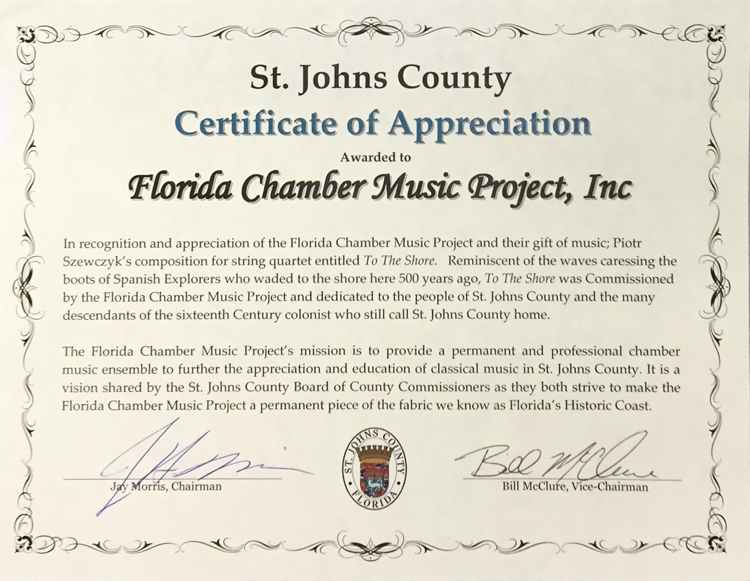 Susan Pardue is a member of the Jacksonville Symphony Orchestra in Jacksonville, Florida. Prior to moving to Jacksonville, she played with the New World Symphony in Miami. A native of North Carolina, she earned a high school diploma and bachelor of music degree from the North Carolina School of the Arts and a master of music degree from the Juilliard School. Her viola teachers have included Sally Peck in North Carolina, William Lincer at Juilliard and Piero Farulli, with whom she studied in Italy on a Fulbright scholarship.

Jacksonville Symphony violinist Patrice Evans is originally from Cleveland Ohio. She began her violin studies in the fourth grade as part of a public school music program. Upon entering high school, she became a scholarship student of Cleveland Orchestra members Richard Roberts and Steven Majeske. She won a full tuition scholarship to Florida State University where she studied with Eliot Chapo. She joined the Jacksonville Symphony in 1989. Always eager to give back in honor of the people that taught her, Patrice is very dedicated to music education, teaching in the Jump Start Strings program at S.A. Hull and Pickett Elementary Schools.

Violinist Anna Genest has been a member of the Jacksonville Symphony since 2002. She has performed at the Spoleto Italy, and Schleswig-Holstein music festivals, and with the Grand Teton Music Festival Orchestra in Jackson Hole, since 2003. Ms Genest has served on the faculties of New York University and the Third Street Music School. She made her Carnegie Hall recital debut in 1999. Strings magazine enthused, “Her tone shimmered and glowed, and the passagework was brilliant.” Artists International Presentations subsequently offered the New York City hall of her choice. The Merkin Concert Hall recital enhanced a list of prestigious engagements, including Alice Tully Hall, Steinway Hall, the United Nations and Columbia University. Ms Genest has served as concertmaster of the New World Symphony. She holds a Master’s degree from the Juilliard School, a Performance Diploma from The Mannes College of Music, and a Bachelor’s degree from Dalhousie University in Nova Scotia. She studied under Sally Thomas for whom she served as teaching assistant at the Meadowmount School of Music.

Cellist Laurie Casseday hails from Atlanta, Georgia where she began cello studies at age 8. She holds a Bachelor’s Degree with Performers’ Certificate from the Eastman School of Music in Rochester, NY as well as a Masters Degree from Georgia State University. Laurie has played in the Jacksonville Symphony Orchestra cello section since 1986, and has also performed with the symphonies of San Antonio, Savannah, Charleston, Chattanooga, Austin, and with Atlanta Ballet and Opera, and Lake George Opera.

On the chamber music front Laurie has performed in venues across the First Coast with Synergy, St. Mark’s Bach Ensemble, Brandenburg Ensemble, and San Marco Chamber Music Society, to name a few. While on the faculty at University of North Florida for ten years she was in constant demand to concertized with fellow faculty members as well as with other JSO colleagues. Great joys also come from working as a private cello teacher to students ages 4 to 74, and from coaching young cello sections in the JSO Youth Orchestra Program.

Laurie is married to JSO double bassist Kevin Casseday, and they have two sons, Sam and Pete, who are both aspiring double bassists as well. They make their home in east Arlington.

Annie Hertler has been a member of the Jacksonville Symphony since 1990. Ms Hertler is honored to be the recipient of “The George V. Grune Endowed Chair”, one of only three endowed chairs in the Jacksonville Symphony. She holds a bachelor of music degree from the Eastman School of Music, where she studied with Charles Castleman. Prior to coming to Jacksonville, she was a fellow in the New World Symphony in Miami Beach. Annie performs regularly with the Coastal Symphony in Brunswick, GA. She is also passionately involved in a volunteer organization called Body and Soul, which brings live music into health care settings.